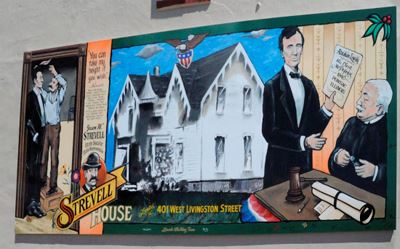 The Story Behind the Mural

In January of 1860, a few months before he was elected President, Abraham Lincoln attended a reception at the home of Pontiac lawyer Jason Strevell following a speech Lincoln gave at the nearby Presbyterian Church. During Lincoln's stay, the 6 foot Strevell has said that he did not think it possible that Lincoln was 4 inches taller than himself. In a letter to his son, Strevell described how he carefully measured Lincoln, who was standing in his stocking feet with his back to the door casing. Using a 2-foot rule on top of Lincoln's head, he found him to be "exactly 6 feet 4."   On the left side of the mural, Strevell is seen measuring Lincoln.  The house in the central portion of the mural depicts the Strevell house before the current restoration began.  On the right side of the mural, Lincoln is shown arguing a legal case for one of Pontiac's citizens.

The artists who designed this mural were Mike Meyer and Adam May.