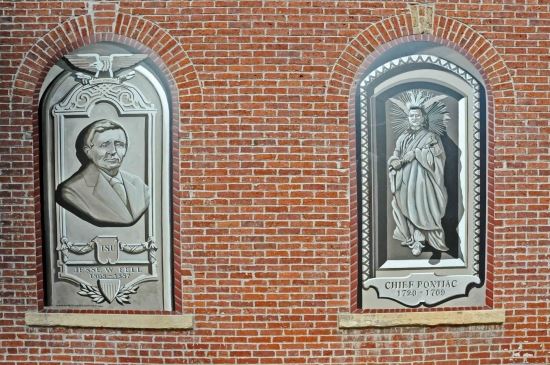 Story Behind the Murals

The City of Pontiac was founded in 1837 by Jesse Fell. Mr. Fell was a Bloomington, Illinois businessman, who also founded Illinois State University. During Lincoln's 1858 U.S. Senate campaign, it was Fell who urged him to challenge his opponent Stephen A. Douglas to their famous series of debates.
Jesse Fell named the town of Pontiac after the legendary Ottawa Indian chief who became famous for his role in Pontiac's Rebellion (1763-1766), a Native American struggle against the British military occupation of the Great Lakes region following the British victory in the French and Indian War. No photographs or accurate drawings of Chief Pontiac survive, so this representation is based on images gathered from other Native Americans from the Ottawa tribe.

Judy Grossman of Sonora, California designed both of these murals.