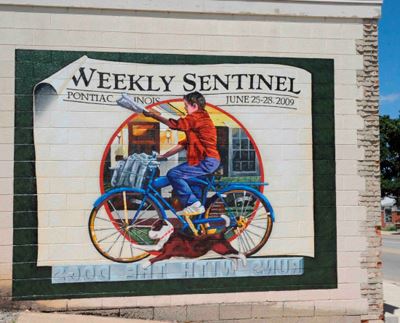 In Pontiac and other small towns across the country, the second half of the 19th century was a time of great journalistic enterprise. In Pontiac alone, two and occasionally three, newspapers competed for the readers' attention and patronage. Often different newspapers openly espoused the platform and ideas of a particular political party. The Pontiac Sentinel was started in 1857 by Phillip Cook and William Gagen, and was Republican in its political outlook. The Sentinel continued in publication under a series of owners until just after 1900. Copies of the early issues remain available on microfilm at The Daily Leader office and the Pontiac Public Library.

This mural design is by Nancy Bennett of Dannco, Inc.