The first of two Civil War Monuments erected in Pontiac was located in the South Side Cemetery. The monument, featuring a standing Union soldier, was completed in 1901 and was sponsored by the local post of the Illinois Grand Army of the Republic (G.A.R. Post #105), and the women's auxiliary group associated with that organization, the Women's Relief Corps No. 15.

The statue is surrounded by a group of headstones, but no soldiers bodies are buried at the site. The soldiers remembered by the engraved stones were buried on or near the battlefields where they fell. The stone markers were erected by the families that lost husbands, fathers, or sons during the war. However, not every family could afford a stone marker, so not every soldier lost from this area is represented. 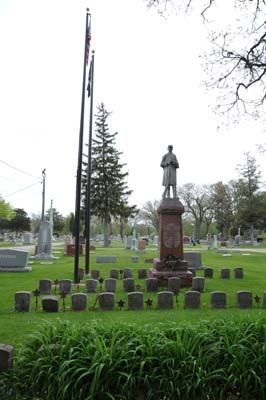 At the meeting of the Livingston County Supervisors in June, 1901, a committee was appointed looking to the erection of a monument to honor all of the Civil War veterans of the county. At a subsequent committee meeting, the location for the monument was determined upon and the contract awarded to the Merkle & Sons of Peoria on their bid of $12,153.50, the total cost of the monument. The monument was erected in the spring of 1903, and was ready for unveiling in June. It is one of the most beautiful soldier and sailor monuments in the state, the total height being fifty-six feet. The bottom base is 14'x14', and the statue at the top is nine feet high, the whole monument weighing 337,255 pounds, or 168 tons.

After the completion of the monument, a committee drawn from the various Grand Army posts all over the county was appointed to look after the unveiling. President Theodore Roosevelt was invited to deliver the address on this occasion and promptly accepted. 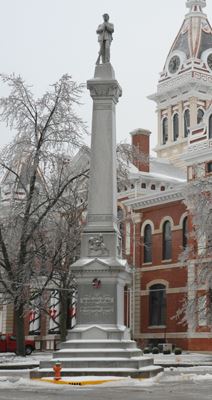 The date was set for June 3, 1903. On that day Pontiac was crowded with old soldiers and citizens from all over the county and the people of Pontiac had made great preparations for the event. However, the weather was against the proceedings, and a severe rain storm, accompanied by thunder and lightning, arrived about two hours previous to the arrival of President Roosevelt. When the special train bearing the President arrived at the Alton depot, the storm was at its height. Rain was pouring down in torrents and the streets of Pontiac were a sheet of water. Notwithstanding this, President Roosevelt alighted from the train and asked for the mayor of the city. Mayor Rathbun was soon at his side, a carriage was provided, and the President driven up town to the stand erected on the east side of the court house. Mounting the platform and facing an audience of less than a dozen people, President Roosevelt delivered the following address:

"Mr. Mayor and Fellow Citizens: I shall not try to make an extended speech. In the name of the people of Livingston County, by whom it has been erected, I dedicate this monument to those who have deserved it. I greet you all, and thank you for coming out in this rain; and I especially greet the members of the Grand Army of the Republic and these National Guards."

The address being finished, the President was escorted to his carriage and  driven to the depot, not having been in Pontiac over fifteen minutes. The unveiling having been completed, the small crowd soon dispersed.