H. H. Scatterday was the owner of Scatterday, Inc., a local bottling company. Mr. Scatterday purchased four lots for $800 in November 1881 where he began his operations.
In 1886 his carbonated beverage business had increased enough that he was able to put up a new brick factory on his residence grounds in the 500 block of East Water Street. Sometime before 1920 the business was moved to an even bigger space in the 500 block of West Cleary Street.
The Scatterday Soda Water Manufacturing Works produced carbonated beverages in the early part of the 20th Century. They also opened the Scatterday Soda Water store in 1901 on the corner of Division and Water.

This mural was designed by Carole Bersin. 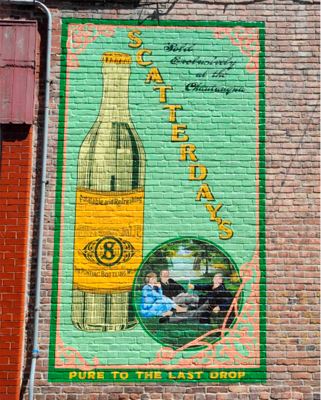